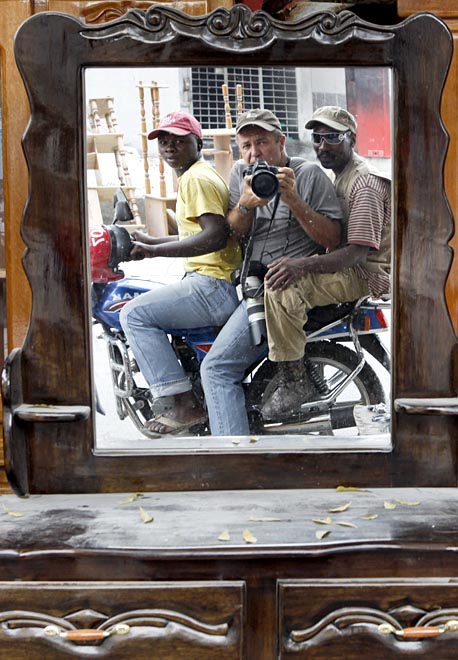 After studying photography at the professionnal college of Orthez, France, Jean-Claude Coutausse starts his carreer as a photojournalist for the photography department of the French army, the E.C.P.A., and covers his first conflict : the Israelian intervention in South Lebanon in June 1982.

As an independant photographer from 1983 he travels to Afghanistan for Newsweek, then is published in National Geographic.

He spends one year at the Agence France-Presse before joining the newspaper Libération in 1985. He treats daily news as well as big topics such as Lybia, students’ demontrations in France in 1986, the presidential elections of 1988, the fall of the Berlin Wall and the events in the East in 1989, the first Indifada in Palestine.

After working one year with the Editing agency he becomes a member of the US agency Contact Press Images and covers the Gulf war. He commences work on a long photographic reporting of the Kwaï River Bridge for Geo, the Independent Magazine and the Sunday Times Magazine. He is among the first to take pictures of the famine in Ethiopia in 1992 which earnt him the front cover of Time and in major publications throughout the world. Travelling several times to Croatia and Bosnia for the Express, Télérama, Time, Newsweek and The New York Times Magazine, he witnesses the fall of the Yugoslavian Federation.

In the mid 90’s, moving away from news reporting he dedicates himself to feature reporting for such magazines as Geo and especially the French edition of National Geographic.

In 1994 coming from a genuine interest in the Sacred and the World of the Imagination he is inspired to work on Haitian Voodoo. It will take him three years to complete this project which won five major international awards.

Jean-Claude Coutausse is currently a member of the Fedephoto group. He shares his time between covering French politics for the daily Le Monde and more personal projects such as a feature on the Holy Land.